Aldford is the club's finescale OO gauge layout. It represents a Midlands coal mining area and wharf. ALDFORD... For Aldford Colliery, Circa 1939 A sleepy Cheshire town just south of Chester near the borders of Wales which could have been woken up with the 'Industrial Revolution'. If fate had allowed! Imagine: With wheat and barley growing in the area and stone being quarried locally, traffic for the development of wharves and docks on the river Dee built up. A brewery was built by the Astall family near the river, and ‘Astalls Ales' was born which grew to match the Boddingtons Bitter which we actually enjoy today! Stone was quarried by another local family the Huxleys who joined with the Astalls to build a canal spur off the Shropshire Union Canal LMS built a connecting arm from Aldford joining the Crewe to Chester at Hargrave Junction which was operated jointly with the Great Western Railway. It is Summer 1939 and a race day at Chester, so there's lots of passenger traffic as well as the freight traffic serving the thriving industries. The layout is under construction. New members always welcome to join the team! 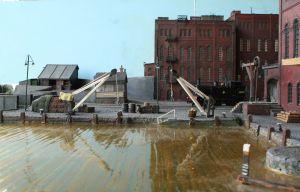